Ozz Makes a Cocktail Master Out of Anyone

How many times have you wanted to make a cocktail, just to realize that you can’t quite pinpoint the exact quantities? Ozz is a special gadget that tells you exactly what ingredients to pour in the glass, and how much of each.

It must be particularly embarrassing when someone asks you at a party to mix a drink that you’ve never heard about before. Even if the name sounds familiar, it is difficult sometimes to tell what and how it should be added to the drink. Ozz is a bar accessory that takes out all of the guesswork when preparing cocktails and helps you look like an expert who has done nothing else but mix drinks all his life. 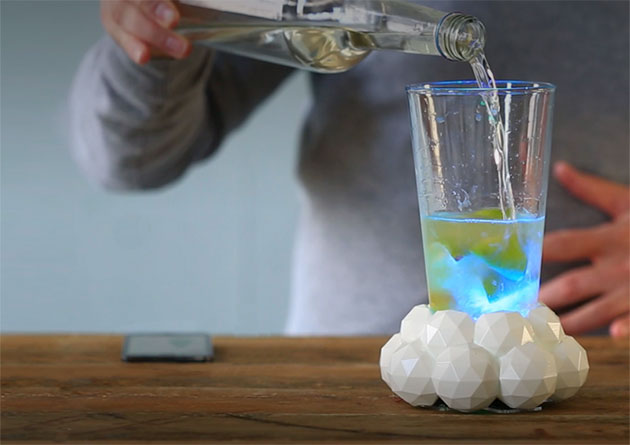 The invention of Eindhoven, Netherlands-based Joris van Gelder, Ozz makes use of visual feedback to let you know that the next ingredient must be added and that there’s plenty of the current ingredient. The device comprises of a cocktail glass that sits on a plastic polygonal base. After selecting a particular recipe with the help of the companion app, which is available on both iOS and Android, the plastic base starts changing colors as you add ingredients. Ozz relies on Bluetooth to communicate with your smartphone. The device also offers a show with its LEDs, besides helping you to mix cocktails like a pro.

Ozz is currently featured on Kickstarter, as its developers are planning to rely on crowdfunding for mass-producing at least the first batch. The problem is that so far the project has raised less than 10 percent of the 150,000 EUR, so the chances of it becoming a reality are pretty slim. There are still a few weeks to go until the end of the crowdfunding campaign, but to be frank, things don’t look that great. The early bird spots are gone, so you will have to pay 89 EUR or roughly $110 to get one. Since the product is designed and manufactured in the Netherlands, you will also need to pay 20 EUR for shipping outside of that country. If this project turns out to be unsuccessful on Kickstarter, it’s most probably because of the steep price of the product, as otherwise the concept is not bad at all, and it could prove useful even in bars.

2 thoughts on “Ozz Makes a Cocktail Master Out of Anyone”