The brief given to the creative team was simple and straightforward: Create marketing communication in the form of print ads for the range of Extra Fine pens by Pilot Corp., the third largest pen manufacturer in the United States.

The brief was given to the advertising team at Grey (Barcelona).With the brief in hand, the creative team set out to work.

Writing and designing marketing communication for a pen may not be the easiest thing to do in the world. In order to break through the clutter, the ad has to be original and still manages to communicate the primary function of the pen: it writes. 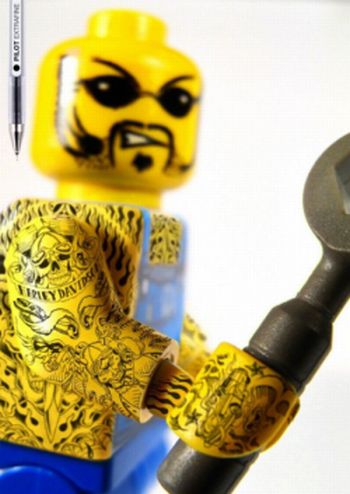 The creative team at Grey had one minor advantage. The Pilot pens had an extra fine nib. They decided to make this ‘extra fine’ quality of the nib as the cornerstone of their ad campaign. With this ‘eureka’ moment under their belt, the team moved on to executing the idea. 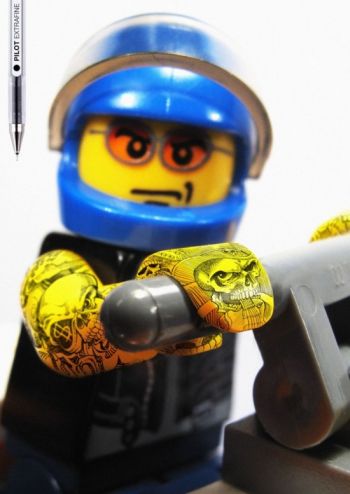 Thousands of doodles were drawn, many mugs of beer were consumed, hours were spent shooting pool; and after all the hard work, the team managed to conceive a brilliant, original, yet deceptively simple print ad campaign for Pilot ‘extra fine’ pens. 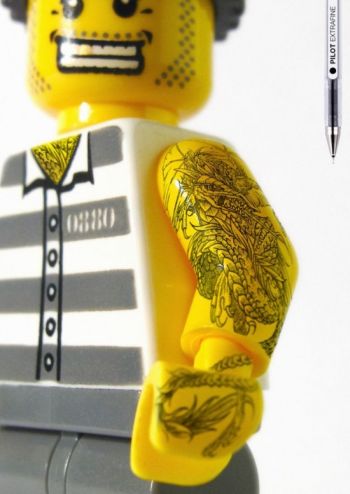 The print ads feature a Pilot Extra Fine pen on the left hand corner of the ad with a yellow Lego model taking up the rest of the ad space. On the Lego model, there are finely detailed tattoos in black ink. The ‘faces’ of the Lego models too have been drawn up by the artists and contain facial features and facial expressions. 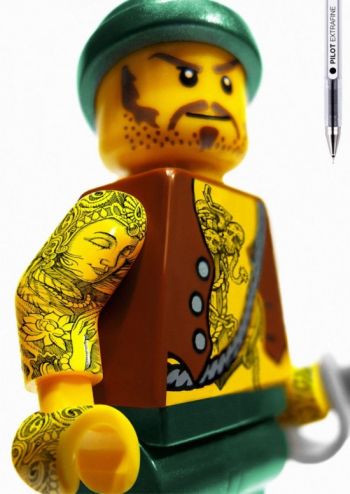 The artwork on the Lego models is simply amazing. One Lego model contains finely illustrated flames breaking out of its body with a Harley Davidson logo on its left arm. Another model is covered up with skull motifs. One skull has a dollar sign eye-patch on its right eye, while another skull has a cowboy hat with a guitar jutting out of its mouth. 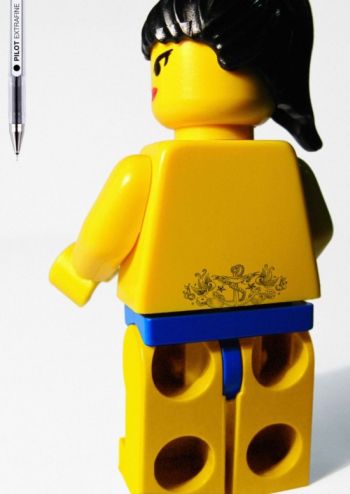 The raciest ad of the campaign features a Lego lady model, without any top on, flaunting her bare back to the viewer. A tattoo, which features an anchor, hearts, and dice inscribed on her lower back. The only piece of clothing on the model is a blue thong. 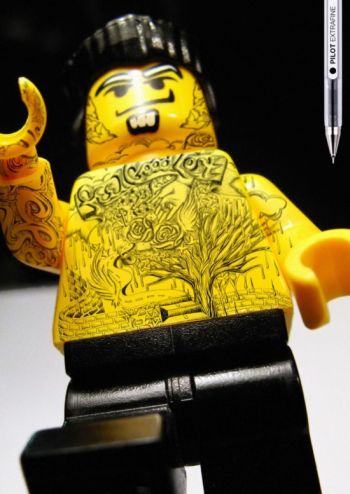 This print campaign for Pilot Extra Fine pens is brilliant because it manages to illustrate the pen’s function through the creative use of miniature Lego models. The guys at Grey do deserve a pat on their backs for this effort.

You can also go beyond this interesting Lego design, when you take a look at Lego Radio Alarm Clock and Lego Robot Design.