Most of us would love to have cats and dogs as pets around the house. They are cute, cuddly, and can be great fun to play with. The only downside is taking care of them can be quite a task no matter how much we love our pets.

What if you could have a fully functioning robot toy as a personal pet. You don’t need to feed it or bathe it or take it to the vet. Just change the batteries once in a while, perhaps. Now that would be a really cool thing to have. 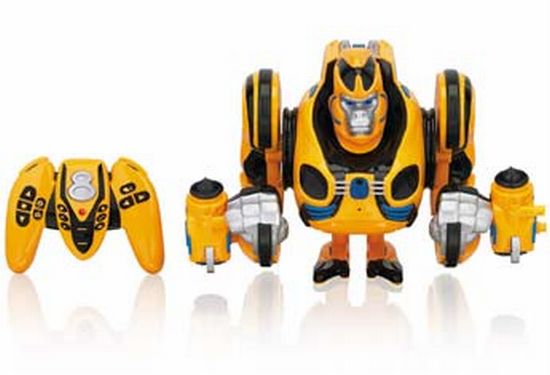 Bossa Nova Robotics is a tech company that design robots with an endearing personality. Their latest creation is an ape-inspired robot called the Prime-8 Gorilla. The ape-like robot may look like a fun toy to have, but it has been developed with intelligent features as well making the ape robot a perfect pet to have.

Prime-8 Gorilla has a variety of sensors that enables the intelligent toy to explore and interact with its surroundings. You would be amazed when you see the ape robot navigate obstacles in its path, respond intelligently to questions with grunts and growls, and even express itself. The intelligent robot toy even has an internal orientation sensor that prompts the toy to get up should it ever fall down.

The best part of Prime-8 Gorilla is that it can do a number of things to keep you entertained. You can command the robot to shoot a particular target and it will do that, or the large biped arms of the robot can transform into wheels and you can race it against other toys, or you could play dodge ball with the ape robot and try to hit its blue sensor.

Games are just a part of the Prime-8’s features. It could also double up as the guardian of your room and thwart intruders by launching rubber darts at them. What more could one ask for in a toy or pet.

Another cool thing you could do with the Prime-8 is to program it to do new tricks. The user can select from a list of 100 tricks that comes along with the ape robot. It can remember 10 new tricks at a time. Get yourself this toy at $77.99.

The Prime-8 Gorilla, with its appealing aesthetics and intelligent functionality, is the future of robotics and toy technology in particular. There may come a time when the toys that we have serve as our pets as well.

It’s time we turn towards the rapidly developing technology and acknowledge inventions such as those of Electroadhesion Robot and Voice Activated R2D2 Robot.