Ahh, the joy of old video games. It would be nigh on impossible to try and recapture the splendor of the first time we experienced Atari, Nintendo, or even the original Sega. Yet if you are a long time gamer, chances are you remember those days with a bit of pride. Video games used to be hard, there used to be no such thing as character development, and some simply didn’t have an ending at all, making the journey that much more important than the destination. We simply didn’t have high definition cinematics or complex acrobatic melee combats, making the actual gameplay king. If you are looking for some ways to show off your retro gaming spirit, here are 5 video game rugs that can help you do so. 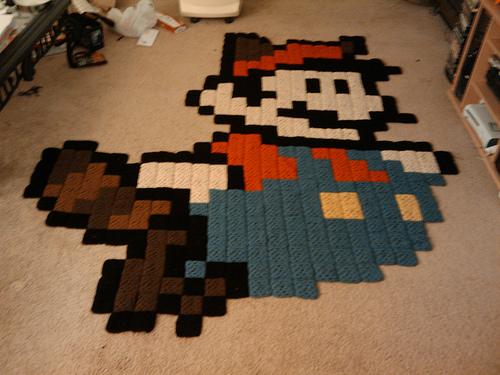 My wife absolutely adores Super Mario Brothers 3. She isn’t even a serious gamer, but she has played through this game on our Wii more times than I can count. As such, this Super Mario 3 Racoon Rug would make the perfect birthday present for any Mario Brothers fan. Incredibly detailed and precisely capturing the 8 bit glory of the game,  I could see this fitting nicely into a finished basement or kids’ room. 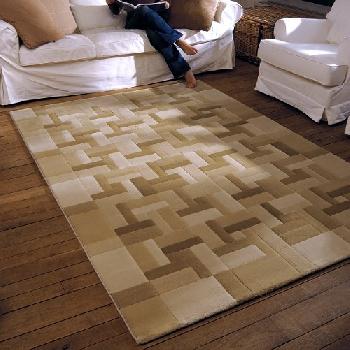 Even the average person who has played a tiny amount of video games in their lifetime can probably recite the Tetris theme song by heart. It is short, catchy, and represents a time when puzzle games were extraordinarily basic but still wildly addictive. I have wasted hours upon hours playing Tetris, although not in the mode that you might think. Competitively speaking, Tetris is hilariously good fun. Dumping lines of garbage on your opponents while the wallow helplessly and scramble to save themselves from inevitable doom is an experience that’s not to be missed. If you want to put that experience into a carpet, this Tetris rug would be the way to do it. Admiteedly if they really wanted to go retro, the rug would be colored,this is still pretty close. 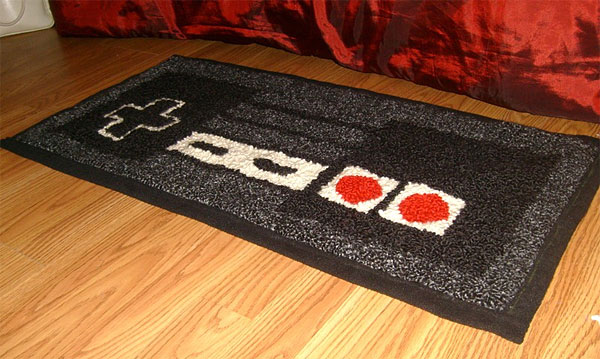 Rather than have your rug represent one game, why not go for something that shows off your affection for an entire console. The original NES was arguably the most popular system of all time..at the time. There were hundreds of games, everyone had one, and competition was scarce. The video game industry really began to skyrocket when the console was released, and everyone can easily recognize the controller. This NES Controller Rug would be a great conversation piece for new guests for your home, and you can swap battle stories about how you beat the original Mega Man and figured out the boss weaknesses before the advent of the Internet. 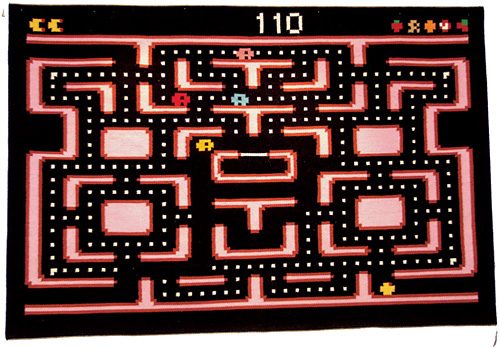 If you thought we would leave out our main yellow man in a piece about retro gaming, you would be mistaken, This Pac Man Rug looks almost exactly as if you were playing the game ony our floor, but you’ll pay a high price for the authenticity. Each rug is hand-woven in portugal and is weaved from 100% wool. The picture you see is actually only one of two in existence, although I am sure you could come up with a similar piece if you dug deep enough. The rug cost $1,800, so that puts it well out of the price range of your averaging gaming fan. Considering I am wonder about how to pay for the next sequel to Starcraft, I don’t think I will be picking up this gorgeous rug anytime in the near future. Still, it looks awesome, and I will not fault anyone with more money than time in actually purchasing one. 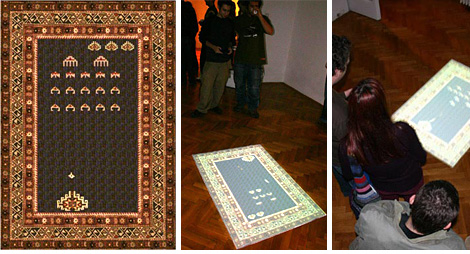 Another staple of retro gaming as we know it involves saving the world from hundreds of tiny alien spaceships. This Space Invaders rug actually looks a lot more like a traditional Oriental rug, with the added flavor of tiny alien ships of course. Created by Polish artist Janek Simon, it has a political message of sorts attached to it, but that doesn’t mean that any gamer can’t appreciate the beauty and incredible detail derived from this modified Armenian carpet. Besides, everyone loves Space Invaders or at the very least can recognize the game, so I am sure there are fans for this piece everywhere.