Shouting Vase Could be your Answer to Hold Anger

There would hardly be any person who has not encountered anger in one way or the other in their daily lives. Anger is a natural phenomenon. But with the help of shouting vase, you can win over from this phenomenon of anger.

Shouting vase was first introduced on NKHK’s Good Morning Japan show. With the help of this product, you would be able to win over your immediate frustrations and can turn them into whispers. Shouting vase in reality is a plastic jug which has been especially made to fit exactly over the contours of your mouth. It has the ability to absorb shouts and screams easily, after storing them in the vase, the screams are emitted with the help of tiny hole which is located at the base.

After its publicity on various broadcasting channels via Popular TV shows, this awesome pottery-inspired item has become a hit. When you feel you are so much angry hold this shouting vase and speak your mind and you could feel how softly and easily your anger passes from the hole at the base. 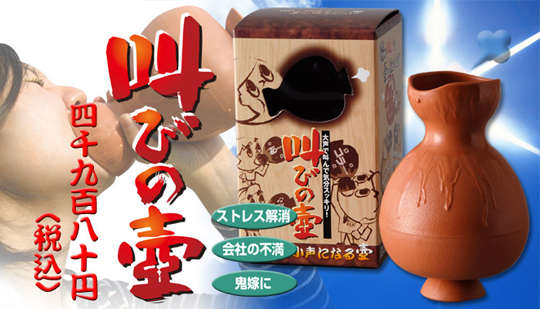 Shouting vase could be a perfect gift for one of your colleagues whom you think is a loud person. The size of the vase is 12.5cm x 12.5cm x 18.5 cm and weighs only 210g. The material used in making this product is ABS resin, China. If you have the ability to become angry at the drop of a hat, shouting vase could solve all the extreme instances softly. The product is available for $83 only.

For other funny stuff, check out the Nose Candy Dispenser, the Golf Club Drink Dispenser or the Batman Slot Car Racetrack.