Siemen’s Concept Phone Is More Of A Futuristic Wrist band

The number of gadgets for ‘on the move’ usage are multiplying at a mind boggling rate however the pockets to hold these gadgets aren’t which raises a question that confuses the average joe every morning ‘where does this gadget go?’ however it seems as though  Visionaries GmbH (on the behalf of Seimens) have found the answer; why not wear the gadget. 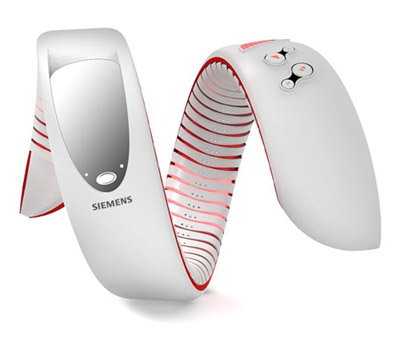 The basis of this concept is to take the mobile phone and make it something that doesn’t bulge out of your pocket but instead some thing that attaches itself to the user. The phone itself is coiled up and will wrap around the users wrist which is a very out of the box approach as compared to the Nokia m31 concept. Adding to this phone has a soft backlight on the inner side which would give it a cool luminescent effect especially in the dark. 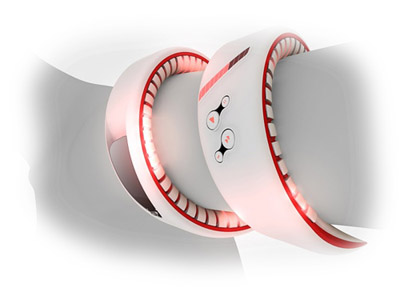 But to make room for the radical body design the display seems to have been compromised thus not making it very large. No buttons are visible in these images with the exception of the music controls that to the designer obviously seem to be the highest importance. All in all this revolutionary phone would definitely make a neat multimedia handset to carry around.