LEGO has paid homage to one of the greatest characters, and one of the greatest villains, of the silver screen. Stars Wars IV: A New Hope gave the world one of its most memorable (and powerful) villains when Darth Vader made his grand entrance on screen, after the Enterprise captured a Rebel ship.

The black colored body cast replete with armor, cape, and a skull-inspired visor became an instant hit with the legion of Star Wars fans. Fans were also in awe of Darth Vader’s ride in the movie – the advanced TIE fighter. 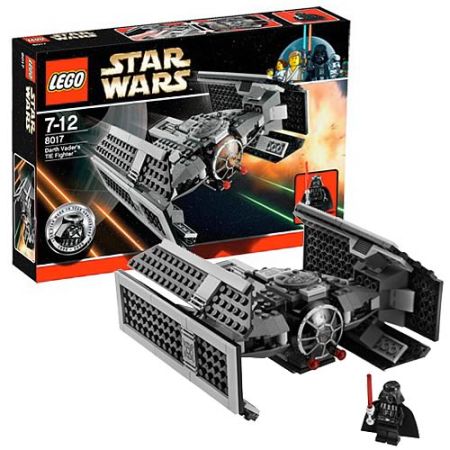 To celebrate the 10th anniversary of LEGO Star Wars toys, the brick-toy maker has released the LEGO 8017 Star Wars Darth Vader’s TIE Fighter, as homage to Darth Vader and his ultra-mean fighter. The advanced TIE fighter shares many characteristics of its master, and is a symbolic alter ego of Darth Vader himself. The fighter set in a dichromatic black and dark grey, has very powerful weapons such as the twin blaster cannons on fixed mounds that could obliterate anything in its path.

The fighter also had a stonewalled defensive system with a hull made up of lightweight, but extremely tough, duralloy steel that could withstand many direct hits and still function without a scratch.

The LEGO TIE Fighter captures the essence of its screen cousin in true LEGO style. Containing 251 pieces, the LEGO Star Wars box set helps the user to piece together one of the most advanced units of space warfare, brick by brick. The user can start by piecing together the defensive hull and work their way to the extremely flexible wings of the advanced fighter.

The LEGO fighter has an elongated hull that the user can create with pieces of transparent high-grade plastic, and red colored flick-firing weapons that can be attached to the hull. The best part of this toy fighter is that it contains movable parts. The flexible wings, due to its design, can be folded 180 degrees flat, and the hull’s cockpit can be flipped open.

A TIE advanced fighter would be incomplete without the ominous figure of the Sith lord. LEGO has included a miniature sized Darth Vader with a red laser beam in hand, that can be placed in the open cockpit of the fighter. The LEGO Darth Vader is one of the first Darth Vader replicas to have the new torso piece.

With the LEGO TIE fighter, fanboys can celebrate the ultimate movie villain and his awesome ride. It is available at $31.49.

You can know more about such toys. Take a look at Darth Vader Figure and Star Wars Playing Cards.