OK, so I would be the first to admit that getting up in the morning isn’t exactly on my list of fun things to do. If you aren’t the early bird type, one possible solution to making the wee hours of the morning more enjoyable is by picking up a fun alarm clock. If you happen to be a Star Wars fan, then you would love one of these Star Wars MP3 Alarm Clock Lamps. Who doesn’t want to wake up with the power of the Force, am I right? 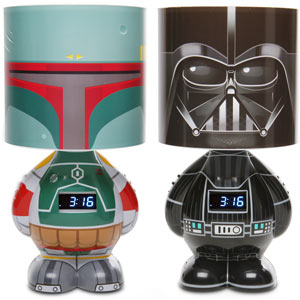 The MP3 alarm clocks lamp come in two flavors: “Desktop Vader” and “MP3 Fett,” both closely resembling their Star Wars character counterparts. Each clock comes in with a number of features, the most obvious of which would be they’re a handy dandy alarm clock. There is also an audio in port for each, so you can happily plug in your MP3 player and blast the Star Wars sound track. They also take on an E26 Type G-25W bulb, but while hte Empire can handle hiring the most lethal bounty hunter in the galaxy, the bulb is out of their price range. In terms of dimensions, the lamps come in at 11.5″ tall and 6″ diameter. At a price of $49.99

, your wallet should be able to take the hit, too. Anything less than that and Deskclock Vader will find your lack of faith disturbing. 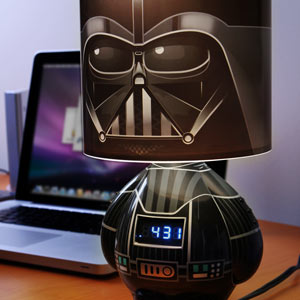 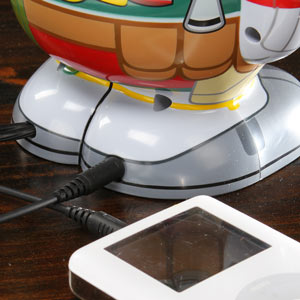 Now, if it just so happens that Star Wars isn’t your cup of tea, don’t fret. We have featured a ton of cool alarm clocks here on Gadgethim, including this fabulous voice recognition alarm clock and ipod dock for the technologically inclined. You also have the option of teaming up with Captain Planet to save the world with this solar powered mini speaker charger, which is also an MP3 player and alarm clock.