To act as a total nerd is to flaunt everything that has a geeky aura! Well, and what’s the best way to show that other than using accessories based on your favorite action games or gadgets. These awesome fight pad key chains are the geekiest of the lot you could have ever imagined, by portraying an exact replica of the actual video game controller. 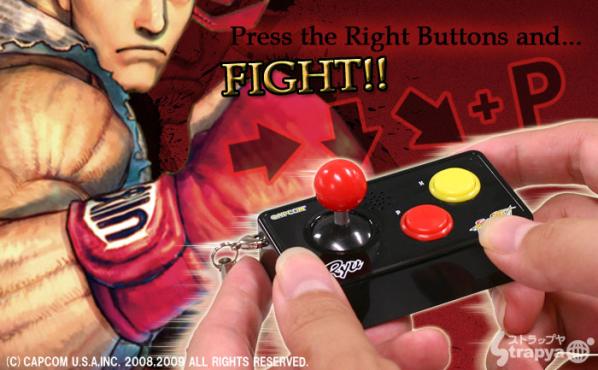 Inspired from the Street Fighter IV, which was the invention of CAPCOM, the fight pad key chain also displays the tiny joy stick with buttons just like the real arcade game. Amazingly, it also functions up to an amazing extent, for e.g. as you push the press button, you can hear the sounds the characters make when you punch them, or the actionable kick button that creates the sounds of the characters’ kicks’.

This accessories should definitely win huge applauds, for the creation of these key chains is perfectly matched to the actual game. The joystick also displays its geeky role by making sounds of the finishing moves when used at the correct timings in coordination with the buttons.

Each of these adorable key chains measure 6.7 x 3.7 x 2.7 cm and functions on 2 LR44 batteries. I guess getting these key chains for just $13.8 is the best deal that could be offered to all the fan base of these street fighter video games. Enjoy some other wonderful accessories like the Nintendo Game Watch Key Chains.