Chess, the game for the smart masses just has a video game make over, no! not the boring computer animated chess games but the actual set which features real Super Mario Bros. gaming characters as the chess pieces. This new set is themed upon the Super Mario Brothers, and is tagged as the Collector’s Chess Edition, something that every chess player and a hard core Mario fan can hardly resist. 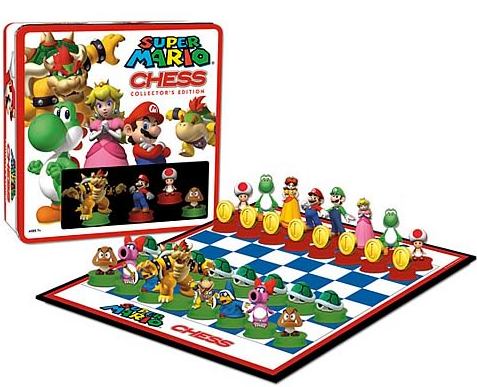 This new set is one of it’s kind as it is the only chess Nintendo Authorized Chess Game, so this is one of those things that has nothing to do with computer generated graphics but still has a Nintendo Logo on it, which is very uncommon.  Packed in a cool collector’s tin this chess set contains all the popular characters from Super Mario all shrunken down to a set of 32 super special high detailed chess pieces.

The set includes characters like Mario-the King, Luigi as the Queen and many other as the different chess pieces. Unfortunately this set is only available for sale in the U.S and can not be exported to any other country. The whole set sells for $39.99, a small price to pay for such a great set, or you can also have a look at the new Super Mario Game on Wii.

One thought on “Super Mario Bros Chess Collector’s Edition, For The Gaming Masses”