The eighties will be remembered for the birth of a pop culture phenomenon and a character who continues to entertain kids (and adults in the garb of kids) to this very day. This character serves as a mascot for a leading gaming empire and has been named, unanimously, as the most popular video game character ever.

Yes, we are talking about the pudgy, short Italian plumber dressed in red and blue, who always saved the day. We are talking about Mario. The phenomenal success of Super Mario Bros. led to Mario appearing in different game genres. One of the avatars Mario adopted was of a kart racer in Super Mario Kart- a go-kart racing game. 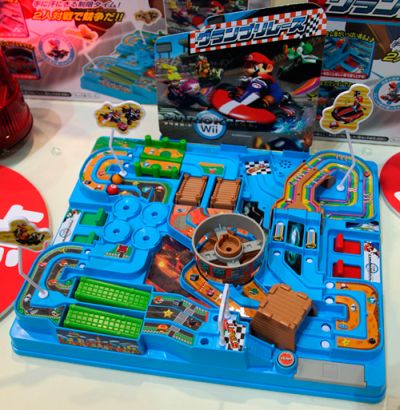 Super Mario Kart has gone on to become one of Nintendo’s best selling cartridge games. This has served as inspiration for a ‘Super Mario Kart Board Game’ developed by Japanese game makers, Epoch. Anyone who has played the video game version would be thinking ‘how exciting can a board game get?’

The Super Mario Kart Board Game has been designed to reproduce the edge of the seat excitement of the video game version.

The board game is a maze that has been designed like a racetrack. The objective of the game is to guide a ball trough various obstacles such as levers, ramps, and launchers to the finish line.

Once the game starts, the player controls the various obstacles through sliding buttons and guides the ball. The very first obstacle the ball has to overcome is a long, green ramp. Sliding the button down will allow the ball to roll down the ramp. Then the ball has to jump over cylindrical white pillars before facing another ramp: this one is short and brown in colour. After navigating the brown ramp, the ball launches into a merry go round. The player has to rotate the merry go round to a particular degree that will allow the ball to exit it.

Once the ball is freed from the merry go round, it navigates another lever or two before crossing the finish line. The Japanese designed board game is rich in design aesthetic. The board covered in a light blue colour with brown and green colored obstacles. The designers have also incorporated elements of the video game racetrack into the board game.

Super Mario Kart Board Game was displayed at the 2010 Tokyo Toy Show. Fanboys of the iconic video game character should be able to lay their hands on this board game pretty soon.

Intuitive Chess Set and Lego Foosball Table are few other games that would be fun and interesting to play.