If you preferred air attacks but for a reason unknown, loved to be on the ground at the same time, then this little devil here is the exact thing that you are gonna need. 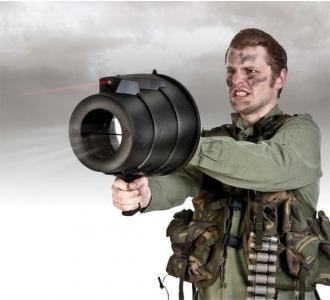 Presenting the Airzooka with laser, a fun gun that launches attacks of harmless balls of air. Well yes, now just like that show on television, wherein the marksman targets the hit with the help of a laser beam and consequently launches an attack, you are gonna be able to do just the same thing, only your attack is gonna be way more harmless than all the massacre that they show on the idiot box. Yeah, you read it right, an attached laser beam helps you mark your target precisely before you let go of that big ball of air. Also, this airzooka provides a hell lotta range, about 50 feet, to be specific! This means the victims are always gonna go crazy trying to figure out who messed up their well-set hair, ruffled their shirts, or blew away that neatly stacked paper bundle that they were carrying. All in all, this little devil here, I believe can be classified as pure fun. And the best part is that no one is gonna get hurt.

Available for a prize of $20, which I think is quite justified, this buy is a riot. Other timepass stuff that you should probably take a look at are the Finger Drum Kit, for the killer drummer stuck in the office and the Slingshot Monkey, a unique modification of the slingshot.