Have you watched The Big Lebowski? If not, then you should check it out. It is one hilarious movie with characters which you can never forget. The Dude and Maude are especially the two most prominent ones. 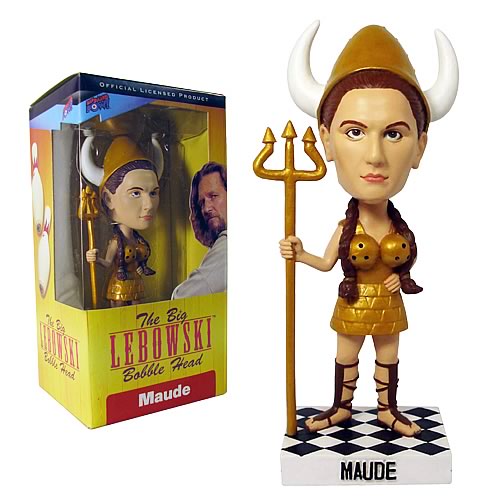 If you haven’t watched the film, then this figure would be of no importance to you. But I am sure the ones who have watched it would love this one.

Basically, the figure takes inspiration from the way Maude is dressed up in Dude’s dream, and he’s trying to teach her how to bowl. She is dressed up as a Viking and Dude is pretty much excited to hold her hands, catch her waist, and teach her bowling. As we all know, Dude has a weird way of thinking. Remember, when the Chinese guy drops his pants to pee on his rug, he says ‘Hey, not the rug man!’

What you are seeing here is an inch bobble head Viking version of Maude from The Big Lebowski. This is exactly how Dude dreamed of her and well, here it is. The best part is that the figure stands on a platform that has the same checks as in Dude’s dream. Well, that for sure revives the whole dream sequence once again. It is available for $12.99 which I think is pretty cheap if you have always wanted Maude in this outfit. So why wait? There are only a thousand limited edition pieces so go ahead and grab one!

Well yes Dude is funny and so is Maude. Besides, it is Julianne Moore who plays Maude, so of course, Dude has to go crazy about her. We all do, don’t we? She is one beautiful lady!

Let me make a confession here – the figure does not really do justice with Moore here. She is way more beautiful than this figure depicts. Trust me, in the Gutterballs dream sequence when she is dressed up like a Viking, she looks utterly HOT! This figure has fallen short. However, I would still buy the figure assuming that it is Julianne Moore and would keep it as a memorabilia of one of the most hilarious movies ever made.

Check out some more figures here: Figures of Chucky and Mate and Iron Man 2 Bobble Head.