Water guns and rubber band guns are old school now. This Fog Ring Launcher is the new gun in town that is not only fun to use but at the same time can scare off your opponents. Believe it or not, it is actually capable of blasting your opponents with fog rings up to 20 feet away. 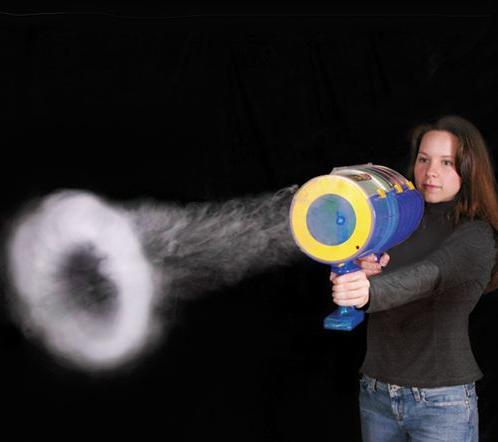 Now here comes the best part, unlike most of such guns, this one shoots perfect rings up to 20 inches in diameter. Isn’t that cool? The person you will shoot the ring at will be amused to see one big ring coming towards him. Not only this, he will feel the thick fog that will strike him. This fog is actually harmless so you don’t need to worry about anything. Everything is fair with the Fog Ring Launcher!

How does it work?

Like I said, there is nothing harmful associated with this gun. There is a big barrel that is filled with non-toxic water based solution. Now, the gun simply heats up this solution and the barrel fills up with fog. As soon as you pull the trigger, the fog is released in the shape of a huge ring. The good part is that this fog is pretty thick and it keeps circulating within itself. The gun also has a built-in speed control mechanism that allows you to adjust the speed depending upon your requirement.

The only issue this gun has is that you need to buy the solution whenever it finishes off. It would have been much better if the gun would have worked on water or some other solution which we could fill up ourselves. Anyhow, one refill of solution can generate a thousand rings so I guess for six months or so you won’t have to worry about refilling the gun again until you keeping shooting the rings throughout the day on every person that passes by.

and requires 6 AA batteries. The gun is not recommended for children under 8 years of age. The weight of the gun is 3 lbs whereas the length is 16 inches.