The KISS Super Bass Headphones, A Must-Have for all KISS Lovers

A pair of headphones is to a music listener, as a guitar is to a musician. Headphones allow avid music listeners to cut most of the surrounding noise and indulge in the music that streams out of cushioned speakers. It is amazing how the same song can sound entirely different with a pair of really cool headphones compared with just an ordinary set.

The visual appeal of headphones is as important as the quality of its sound. Headphones could have the best sound acoustics, but if it has obtuse design that looks unattractive, chances are that it would never stream music. 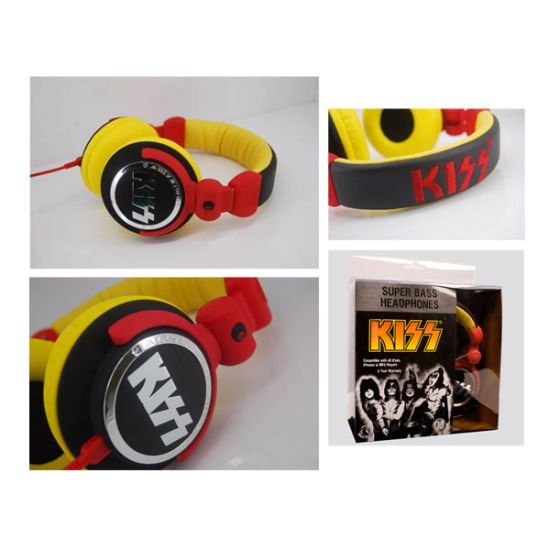 Since headphones and music go hand in hand (or ear to ear), one of the greatest bands in the history of rock music has lent its name and appeal to a pair of headphones. This particular rock band is known for their theatrical makeup, flashy stage outfits, and elaborate live performances. A trademark stage antic of its lead singer is to spit blood during live shows. The rock group I am talking about is none other than KISS.

KISS is considered to be one of the best touring bands to have ever graced rock music. You can now experience the excitement and euphoria of their live concerts with the official KISS headphone set which is priced at $49.95. This is one headphone set with which you can “Rock and Roll All Night”.

Considering the fact that the headphone set is officially KISS approved, it is only natural for the accessory to be colorful and flashy in a flamboyant way. The ‘KISS Super Bass Headphones’ comes in a rich red, yellow, and black ensemble with the band name inscribed in bold red over a black headband. The inner portion of the headband is covered in soft cushion and colored in a warm yellow tone. The connector portion between the headband and the speakers is draped in red. The outer portion of the earphones is black with a silver colored circle surrounding its border, with the name of the band inscribed again inside the circle.

Headphones, with their headbands and large circular speakers, can pose a problem when it comes to portability. The speakers of the KISS Headphones can be folded back, and can transform into a compact travel companion.

KISS fans would be delighted to know that the headphones have been approved by Gene Simmons himself – another reason why this drool-worthy headphone set should become a part of your music collection.

Barracuda Headphone and Pod A Porter are other interesting headphone designs that you can look at.

4 thoughts on “The KISS Super Bass Headphones, A Must-Have for all KISS Lovers”