So who loves skeet shooting here? Anyone who does would want this Live Action Infrared Skeet Shoot straight away. It’s a great product if you love the sport. Even if you are not into the sport, it is a great way of practicing and taking a start of it. 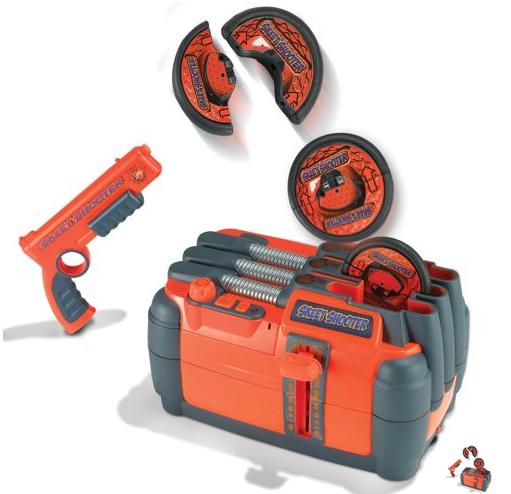 The good point here is that the infrared gun is completely harmless so you won’t need to worry about injuring anyone. It’s pretty much a fun thing. All you have to do is to hit the flying targets with the infrared gun, and they automatically break up as soon as they receive the signal.

I don’t understand, how does it work?

The targets are made from plastic and are equipped with sensors as well. As soon as the gun is aimed on the target and a shot is made, if it is correct, the target will break into two pieces. But, this doesn’t mean that you will have to buy new targets. Not at all! You have to join the target back together not with a glue stick, but they are already equipped with the stuff. The gun is reloaded by pumping it, and in case you have kept the speed at its highest, you will need to pump up the gun as soon as possible. The gun runs on three AA sized batteries and the set is appropriate for use by children above the age of 10. It is available for $49.95

Right now, you just get one color which is red, but who knows maybe the company will launch other colors. If you want to buy it, you will have to stick to red and to be honest it’s the good red not the bad one.