Skateboarding and snowboarding are two popular pastimes that have entered the elite legion of sports thanks largely to the X Games. Skateboarding in particular has been a cultural icon and often reflected the rebellious teen spirit. For those who live close to the mountains, snowboarding has been a perfect alternative to zip past snow covered peaks and hills.

Skateboards and snowboards are built and designed for their particular terrains: city streets and snow. If you wanted to ride a skateboard or a snowboard on a hilly terrain with uneven roads, it would not be a smooth ride. This is where the MXB Shocker motocross board comes in. 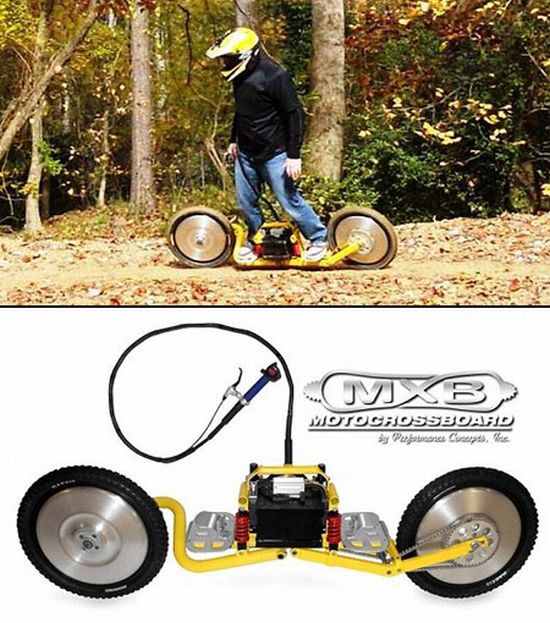 The MXB Shocker has been designed by Performance Concepts as a hybrid between a skateboard and a snowboard. It has an aerodynamically designed plank with an electric motor placed in the center and steel reinforced footboards on either side of the motor. Two large wheels are placed on both ends of the board. The wheels have rubber radials on them to navigate through the tough mountain terrain. 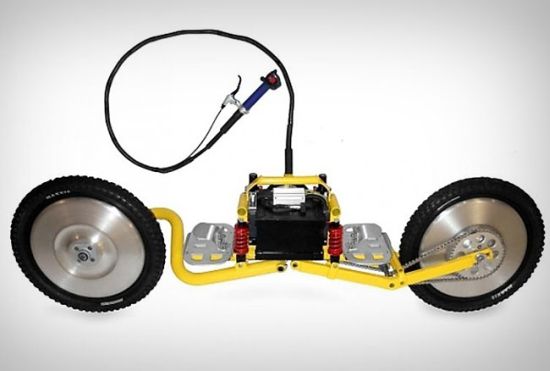 The primary difference between the MXB Shocker and regular skate/snow boards is that the Shocker is driven by an electric motor and does not require any manual energy. The electric motor is a 48-volt brushless motor and can generate 1500-watts of energy that would produce 5 lb/ft of torque. The device can go at a top speed of 20 miles per hour, but can be pushed to hit a speed of 35 miles per hour if the user unlocks the programmable controller that restricts the motor.

A rider can control the throttle and braking of the Shocker through a control unit that is attached to the motor of the device. The unit comfortably comes to the hands of the rider when he mounts the board. To steer the board, the rider has to lean sideways like a traditional board.

Since the Shocker would be used on bumpy terrain, it has high performance shock absorbers attached to the two wheels. Oil and nitrogen filled shocks have coil springs rolling over it that offer adjustable spring rate, pre-load and rebound compression damping. The rider can also adjust the height of the shocks depending on the terrain.

The MXB Shocker motocross board from Performance Concepts is not aimed at displacing the snow/skate board from our imagination. It merely provides an alternative to adrenaline enthusiasts who wish to ride bumpy terrains on a plank and two wheels.

If you are a sports person, don’t miss out on Skatecycle and Air Trekker Jumping Stilts.