Trackase Is a Trackable and Indestructible Piece of Luggage

Unless you own a hardside luggage, you know what it’s like to worry about the safety and integrity of your travel cases, especially since a lot of baggage handlers are known to abuse them.

Trackase gives you a lot of peace of mind, as it is made from a very durable material (which the manufacturer claims to be virtually indestructible) that will protect your belongings from physical shocks, regardless of how brutal they are. On top of that, Trackase can be tracked, as even its name suggests, with the help of its companion app that can be accessed both on computers and mobile devices. I know what it’s like to discover that a bottle of wine was shattered to pieces due to mishandling the luggage, and we all have to admit that losing it is not pleasant, either. 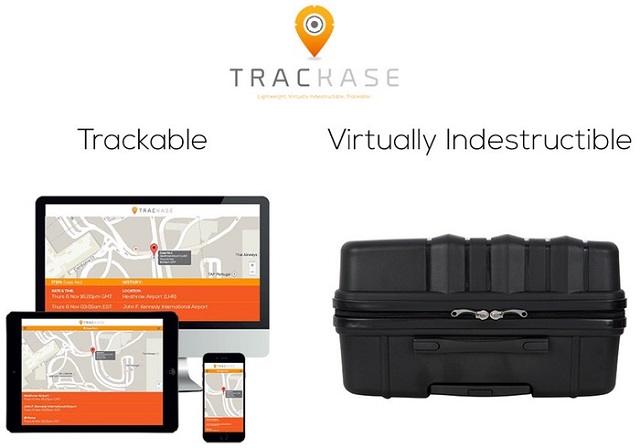 This is what the developers of the Trackase smart luggage had to say about their product:

“Ever had that sinking feeling at the baggage reclaim when your case fails to make an appearance? You’re not the only one. Last year, a mind-boggling 21.8 million bags were mishandled by airlines worldwide. That’s the equivalent of 7 in every 1,000 passengers finding their bags delayed, damaged or lost at the end of a flight.

That’s why we’ve developed Trackase: lightweight luggage that’s tough enough to stand up to pretty much anything you can throw at it (including an SUV, FYI) and equipped with tracking technology so you can monitor its location on your smartphone.”

Stephen Sacks is looking to raise £30,000 (the equivalent of roughly $47K) on Kickstarter in the next 59 days, so that Trackase makes the jump from concept to production. Since this piece of smart luggage is available in three sizes, there are three amounts you could pledge to get one, in the event that the crowdfunding campaign is successful. Backing the project with £160 ($250) will get you a carry-on size case, or you can pledge £200 ($310) or a medium one and £230 ($360) for a large one. The manufacturer estimates that the delivery will take place in May 2015.

You’ll even be able to match your Trackase with your outfit, as this piece of luggage will come in black, dark blue, sky blue, pink or red. While there could have been an even greater diversity, the available colors should satisfy most customers.

Be social! Follow GadgetHim on Facebook and Twitter, and read more related stories about the TUL suitcase that weighs itself as you load it, or the Swash dry-cleaning machine.