While I do enjoy watching some of the older classic Twilight Zone episodes, going back and looking at some of the acting/props give off a certain amount of hilarity. 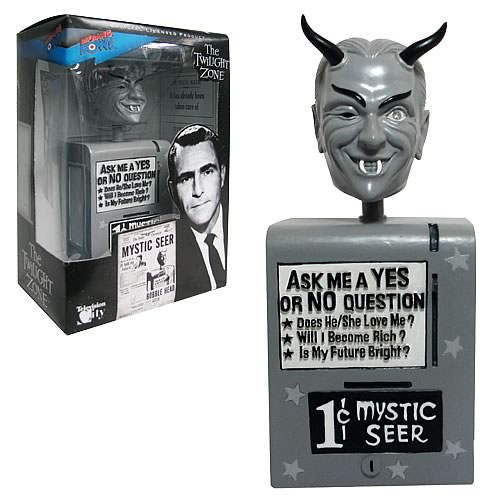 I mean really, if I saw a “mystic seer” machine that looked suspiciously like the devil with a really creepy smile, he can keep his fortune. One penny isn’t enough for me to go near the thing, although it is nice to know that one cent actually bought something at some point. Still, this Twilight Zone Mystic Seer Replica and the Bobblehead both manage to capture a piece of television history, and it wouldn’t be so bad to own that, right? 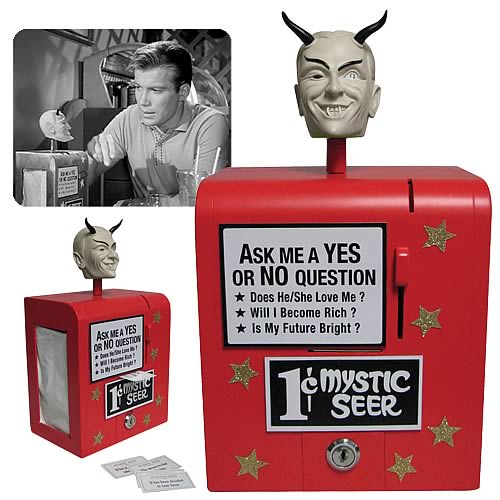 I should note that for the frugally minded, the bobblehead is a much better choice. While it isn’t an official replica of the original prop, the spirit of the original machine is captured nicely, and the fact that it is a bobblehead toy makes it look a whole lot less threatening. It stands 6 and a half inches tall, and would fit nicely on top of your TV set while you watch the original episode, “Nick of Time.” Fortune telling cards are also included, but would you really want to use them after seeing what happens? At a price of $12.99, you won’t be breaking your bank in the present or future, either. The opposite is true of the replica, which clocks in at a whopping $249.99. Of course it also looks exactly like the one from the original episode, and everything on it works. The coin mechanism, fortunes can be dispensed. You name it, and the replica has it. Not bad, right?

If a creepy looking satan spawned toy isn’t exactly your thing, not to worry. We have featured plenty of fun toys for you to play with. This remote controlled SUV with a water cannon, for example, should be more wholesome fun for everyone. You can also get in touch with your dark side with the Jedi or Sith mini lightsaber that you get to assemble yourself!