Love it or hate it, the Warcraft franchise has become an ingrained part of gamers’ DNA everywhere. You simply can’t escape the World of Azeroth, even if you haven’t played the in-slight-decline smash hit World of Warcraft. Still, there are still millions of fans out there, and each has his or her own way of expressing their love for the game (s). I have put together a list that caught my eye, and any fan of the series would be happy to have these Warcraft items, even if their significant others would disagree. 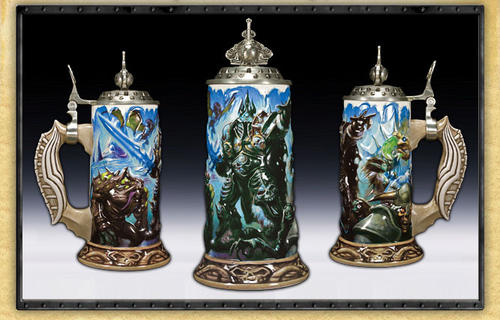 A tankard of ale is the best way to kick back and relax after a long night of raiding, so you may as well have the proper equipment at your disposal. Featured in our list of geeky beer steins, this World of Warcraft: Wrath of the Lich King  Stein is intricately details and captures the spirit of WoW in a nice, compact format. Whether you are horde or alliance, either faction still enjoys a nice tall glass of brew, and you can choose your side when making your purchase. Maybe the undead hordes are angry because they can no longer enjoy the taste of beer. I mean, I know I would be, and I would be very angry at those that still has the capability to imbibe.

By fiber be purged! Now you can have a cataclysm every time you go to the little boy or girl’s room with this spiffy looking World of Warcraft bathroom. Filled with everything Azeroth has to offer, this is some serious dedication to the game. If you need some weaponry to go along with your trip to the potty, plenty of medieval fare is included. I probably don’t want to know how much it cost to renovate your bathroom in this unusual manner, though, or how this could negatively impact the resale value of your home. 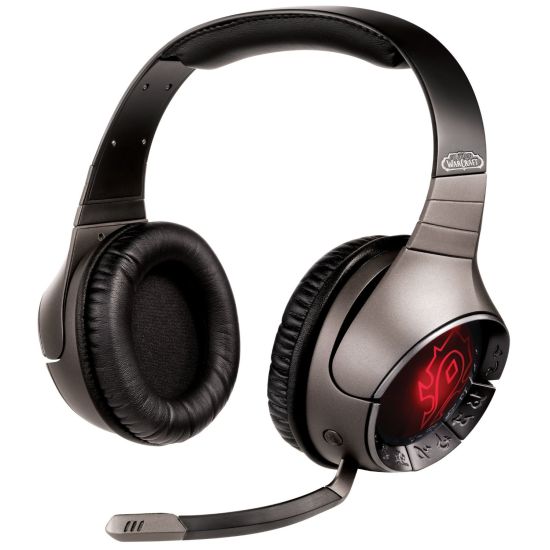 I always thought that Sound Blaster had the best name for a company ever, but apparently they also make decent headphones. These World of Warcraft wireless headphones provide 2.4 Ghz of audio power and sport THX TruStudio PC sound technology. The battery is an impressive lithium polymer rechargeable and provide 8 hours of uninterrupted talking time. The headphones also come with a noise canceling microphone with VoiceFX technology. That means you can sound like  a gnome. You know, if you want to. 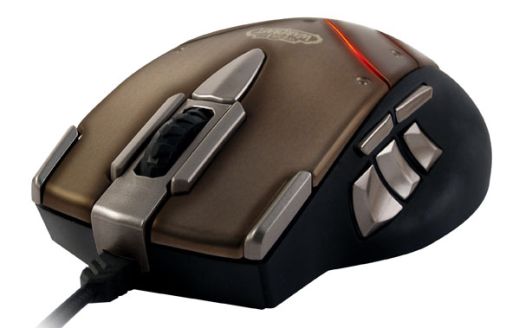 The expansion brought a lot of changes to the game, even if many though they were unwarranted or disliked. If you want to get back in the game, though, you are going to need this World of Warcraft Cataclysm gaming mouse. This Steel Series mouse has 14 customizable buttons, so just about any spell you need can be available in an instant. The mouse also looks incredibly detailed, along with backlighting that can provide 16 million collars with 4 different levels of intensity and pulsation. Pragmatic? Absolutely not, but that doesn’t make it look any less cool. If you are into World of Warcraft, anyway. 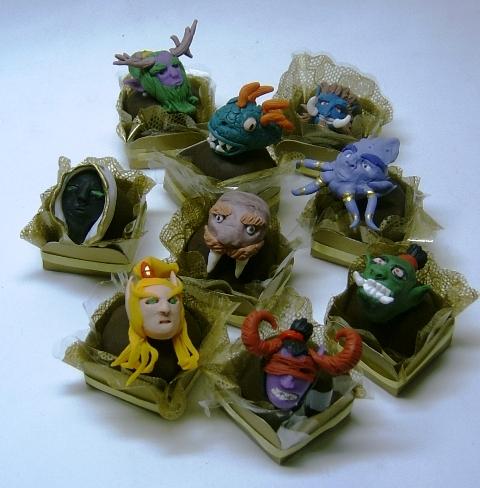 Take Azeroth and combine it with one of the most delicious treats the real world has to offer, and you get something along the lines of these World of Warcraft Truffles. Are you mad that the overpowered Ork death knight just smashed your face in? Now you can take your sweet revenge by biting his face off in truffle form. There are plenty of other options to choose from too, including the infamous merloc, Illidan,  a blood elf, and a number of others. On one hand, it is almost a shame to destroy such a well detailed and tasty piece of work, but on the other everyone needs some sugar now and again. I think whoever made these is onto something and should start their own Warcraft themed bakery, including a Ragnaros carrot cake or perhaps a Stormwind cookie. The possibilities are endless, after all, and with millions of players of the game worldwide, you’d have some organic demand.  Just don’t make any gnome cupcakes, they don’t deserve that kind of treatment. Boo yah!