How many times you have ever thought about what to do with your old SCSI hard drive?  You would have got vague ideas like throw it as a junk stuff, but Etsy online has come out with a grand idea when they converted recycled oversized 10 platters into one of a kind Pen Holder Hard drive clock. 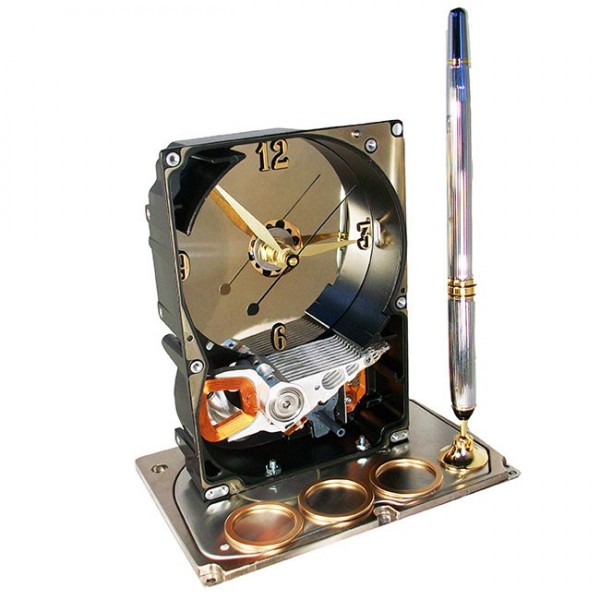 It looks amazingly a good piece of art work which has a size of approx. 6″ x 7.” You could easily notice it is twice as thick as a normal desk top hard drive.  It will definitely look awesome when you would display it on your work desk, as the pen and its holster have a silver and gold finish offering an exceptional contrast to the actual hard drive.

This rare clock is going to give a tough competition to its counterparts with its look and feel. Check out the golden raised numbers on the hard drive’s actual disk platter along with brass hands and the “read-write heads” on its arm. After noticing, you will come to know that its second hand is in black which look striking.  But some people, after taking its glimpse could doubt and think whether this prestigious clock is genuine.  To answer this proposed question, the artists of this hard drive watch have signed a “Certificate of authenticity”, which could make believe anyone having doubts regarding its authenticity.

The pen holder hard drive clock is available just for $45 and its creators, TecoArt at least know how to convert an old stuff into a mind blowing art piece, which can be given as a cool gift to our friends and colleagues. Some other master pieces you may appreciate include Laser Theater for Your Extreme Rock n Roll Parties! and Motorized Inflatable Pool Lounger