The Trunk: A Sophisticated Arcade Machine

Before the Nintendos XBoxs and Playstations monopolized the gaming industry, gamers would play arcade machines for their gaming fix.

On any given day, gamers would flock to the nearest mall or arcade centre and unleash their game-calloused fingers on joysticks and buttons. Hours would be spent standing and staring at CRT monitors as gamers blew up planes or killed game-villains. Those were the good old days.

Today, the CRT monitor has been replaced by high-resolution digital screens; joysticks and buttons have transformed into customized gamepads; and no one has to play games standing up (except for Wii Sports). Post the gaming-console revolution, gamers can plug in their consoles to their LCD or LED screens and indulge in gaming bliss. However, if you grew up playing the stand-up arcade machines, the high-end consoles may not quite cut it for you. 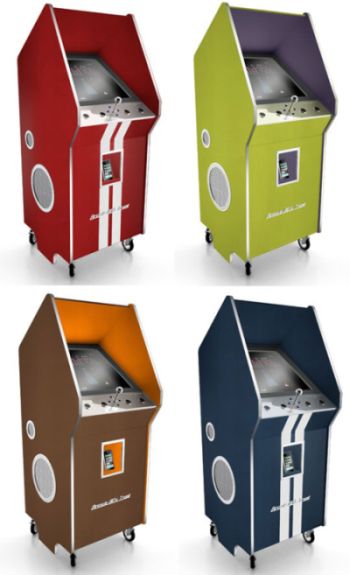 The old school arcade machine does invoke an air of childhood memories and misty romanticism. Kids (now adults) who grew up in the arcade age may still want to possess an arcade machine that plays games such as Donkey Kong and 1942.

The French arcade machine has genuine A-grade leather hand-stitched to it its frame and covered by royal calfskin dressing. The dashboard of the old school gaming machine has a smooth chromium-plated finish to it.  The Trunk’s drool-inducing looks are evenly matched by its new-age performance. Its monitor is a spanking new 1080p resolution LCD screen accompanied by 1400-watt crystal-clear sound system. The old-schooler even has an iPod/iPhone dock for its modern day users.

At the heart of this luxurious French arcade machine lies gamer paradise. The Trunk houses 60 classics such as Space Invaders, Pac-Man, Mister Do, Rally X, and loads more. Get ready to stretch your fingers and push some serious buttons.

The retro arcade machine is available in 56 different shades and comes in two styles. The ‘Classic’ version has a uniform looking exterior and looks like a typical mall arcade-machine. The ‘GT’ version features racing stripes on the front portion of the machine.

If you are an old school gamer with an inflated bank account, then The Trunk is the machine for you.

All the gaming geeks can also go through PS4 Console Design and Steampunk PS3 Mod to learn more about such gaming gadgets.

One thought on “The Trunk: A Sophisticated Arcade Machine”