In general, gothic style items have always been hit or miss for me. The dark, almost medeival feel to many pieces of gothic art and accessories does hold some appeal, but at times it is simply too over the top to be taken seriously. These Omoshiroi Gothix Tissue Boxes, however, help to portray the gothic style without taking themselves too seriously. They even come in three distinctly different styles: Skeleton, Witch, or Maid. 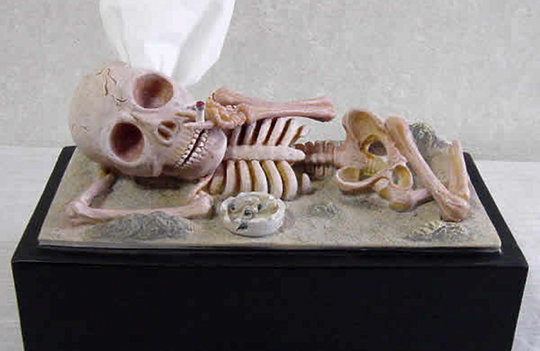 As you can see, our skeleton friend here doesn’t look like he is all that worried about being one of the faceless undead. The cigarette seems a bit redundant, but there is some novelty to be had by pulling tissues directly from the former residence of his brain. The maid piece looks like it was taken directly out of a bad anime, but has just enough sex appeal to remain tasteful.

The witch piece looks like it would be the perfect accessory to your next Halloween party, featuring a greatly detailed spell casting scene including a cauldron and a variety of bones on a desolate landscape. Whether you want to appear scary, humorous, or naughty, the options here are laid out for you. The price you pay for a heavily detailed tissue box is still fairly high, though, considering that each piece clocks in at $63 USD. For a tissue box, that is some serious walking around money. Shipping will set you back about half the price of the item itself, too, at $30.

If the gothic style seems like is right up your alley, we have featured some other dark stuff here on Gadgethim. The Tattoo Motorcycle suit that appeared in our recent post featuring the 17 Coolest Motorcycle Suits would fit a gothically oriented person quite well, for example. You could also lighten up the mood with this Ghostbusters Stay Puft Marshmallow Man Head Knocker. Not quite gothic, but just scary enough to get by.