Star Wars Episode IV: A New Hope has one of the most memorable moments of the entire Star Wars film franchisee.

After watching the movie, Star Wars fans had a very strong desire to possess a projector that would show a holographic message and recreate that magical, movie moment. More than 30 years later, in 2010, the lifelong ‘holograph projecting’ wishes of many a Star Wars fan is now finally coming true. 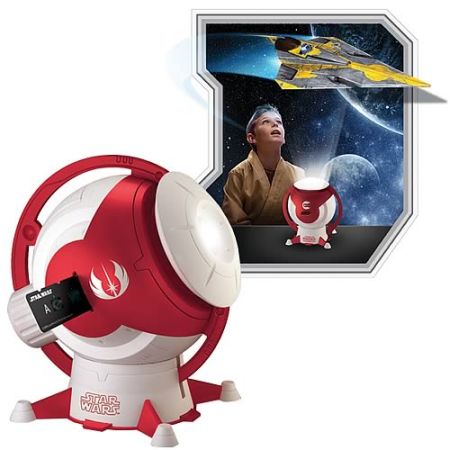 EntertainmentEarth.com, a website for fanboy products, has in its possession a ‘Star Wars Clone Wars Jedi Talking Projector’. Though the projector is no R2D2, it matches the droid in projecting holographic images on any surface or ceiling. The projector contains images of 24 different starships (and more) from the Clone Wars universe.

The Jedi Talking Projector is a beautiful piece of space age design to look at. The projector is cased in a solid circular frame, which is bordered by a semicircular arc. The circular frame sits on a broad, rectangular base. Flat shaped tripods extend from the base lending it more stability.

The color cues of the Clone Wars Talking Projector deserve a special mention as well. A metallic maroon covers the semicircular arc, tripods, and the central portion of the solid circular frame. The rest of the body is covered in space white, while the Star Wars logo is stenciled in maroon on the base of the projector. Straight lines and circular indentations give the projector a sleek, aerodynamic finish.

With the Star Wars Clone Wars Jedi Talking Projector, you can go on a magical ride into the Clone Wars universe. The projector contains exclusive images of starships including Turbo Tank and the Vulture Droid. The images are voiced over by Captain Rex who will give you an encyclopedic insight into the design and functions of the various starships.

There is more to the Star Wars Talking Projector than its radical design and awe-inspiring holographs. Namely, its technical features. The space age projector displays crisp images with bright and clear holographs. The user can also adjust the projection angles for a comfortable viewing experience.

If you are a Star Wars fan who has a ‘holograph projecting’ wish, the Talking Projector is a collectible that might just make your wish come true at $37.99.

If you liked this, there are more interesting products on the site that might interest you: Laughter Grenade and Folder Shaped Photo Frame.